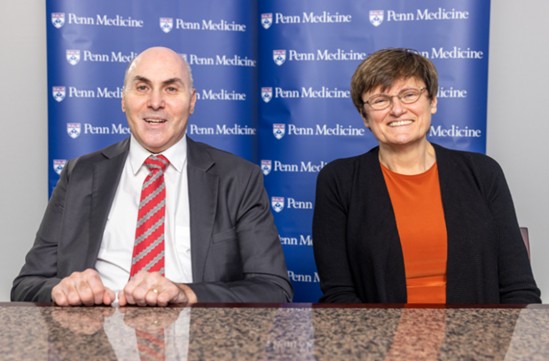 Assoc. Prof. Karikó has been working side by side with Prof. Weissman in developing mRNA technology and its applications in medicine. In 2006, they discovered that modification of nucleosides in mRNA could reduce cellular reactions toward foreign RNA. This was an important step in the utilization of mRNA technology. Foreign RNA is naturally recognized by cellular anti-viral machinery, which suppresses translation of mRNA and induces inflammation. These reactions were the main obstacle preventing the applications of mRNA in prevention and treatment of diseases. This and subsequent studies of Assoc. Prof. Karikó and Prof. Weissman have led to the use of pseudouridine in mRNA production and invention of purification method for pseudouridine-containing mRNA. These are the critical basis for the mRNA vaccine development.

The achievement of Assoc. Prof. Karikó and Prof. Weissman has led to the rapid availability of COVID-19 mRNA vaccine, which has saved millions of lives and become an important tool for the control of COVID-19 pandemic around the world.

The Prince Mahidol Award Foundation received 86 nominations from 35 countries.
The Scientific Advisory Committee carefully screened all candidates from the year 2019-2021 and subsequently submitted a short list of candidates to the International Award Committee who made a recommendation to the Board of Trustees. Her Royal Highness Princess Maha Chakri Sirindhorn of Thailand presided over the meeting of the Board of Trustees held on 26 October 2021 during which the final decision on the Prince Mahidol Award 2021 was made.

The Prince Mahidol Award Foundation was established on 1 January 1992 in commemoration of the centenary of the birth of His Royal Highness Prince Mahidol of Songkla. The Foundation is under the Royal Patronage, with Her Royal Highness Princess Maha Chakri Sirindhorn as President. The Foundation annually confers two Prince Mahidol Awards upon individual(s) or institution(s), who have demonstrated outstanding and exemplary contributions to the advancement of the world’s medical and public health services. Each Award consists of
a medal, a certificate, and a prize to the sum of US $100,000.

In the past 29 years, the Prince Mahidol Award has been conferred to 87 individuals and groups of individuals and institutions. Among the Awardees, 5 subsequently received the Nobel Prize:

(1)   Professor Barry J. Marshall from Australia was conferred the Prince Mahidol Award in the field of Public Health in 2001 for the discovery of the new bacterium identified as Helicobacter pylori that caused severe gastritis and its sensitivity to particular antibacterial drugs.  He received the Nobel Prize in the field of Medicine in 2005 for the same discovery;

(3)   Professor Dr. Satoshi Omura was conferred the Prince Mahidol Award in the field of Medicine in 1997. He is known for the discovery and development of various pharmaceuticals originally occurring in microorganisms. His research group isolated a strain of Streptomyces Avermitilis that produce the anti-parasitical compound avermectin which contributed to the development of the drug ivermectin that is currently used against river blindness, lymphatic filariasis, and other parasitic infections. He received the Nobel Prize in the field of Medicine in 2015 for the same discovery;

(4)   Professor Tu You You, a member of the China Cooperative Research Group on Qinghaosu and its Derivatives as Antimalarials, was conferred the Prince Mahidol Award in the field of Medicine in 2003 in an organisational category for the discovery of Qinghaosu as a new drug for treatment of the P.falciparum malaria. He received the Nobel Prize in the field of Medicine in 2015 for the same discovery;

(5)   Sir Gregory Paul Winter was conferred the Prince Mahidol Award in the field of Medicine in 2016. He was a pioneer in the field of antibody engineering and modification technology. He invented techniques to humanise antibodies for therapeutic uses, which later led to the creation of cutting-edge therapeutic drugs. He received the Nobel Prize in the field of Chemistry in 2018 for the same discovery.

Ministry of Foreign Affairs of Kingdom of Thailand